How do you doo? Skydoo was an amibitious futuristic 3D racing game developed for a university course. 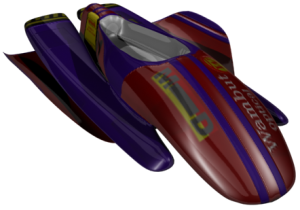 The game was developed between March and June 2004 for the Computer Graphics 2 & 3 course at the Technical University of Vienna by Paul Guerrero, Florian Kleber and myself, winning one of the four “second” places in 2004’s Hall of Fame. Development happened simultaneously on Windows and Linux systems, using OpenGL, the SDL layer and OpenAL as the main libraries. The final submitted version was a fully working demo running on both platforms, featuring three different racing tracks, one and two player (splitscreen) modes, some neat 3D effects, fine 3D models by Paul Guerrero and cool menu design by Max Rieger.

Unfortunately, ideas to continue development to create a full game never got past the planning stage. However, within the few months of development we learned a lot about real-time and OpenGL programming, and much of this knowledge was used either directly (reusing and refactoring much of the base code) or indirectly (re-implementing those parts which turned out to be less successful) when developing Max Fighter.