TinT was the last of several Tetris implementations I have done over the years – all unfinished. The first dates back to the old ASCII times on DOS, but the first “serious” version, fully playable with skinnable graphics and a two player mode, was on the Amiga. I later did a mobile version for J2ME, intending to implement a two player mode via bluetooth, but stopped development when it turned out that my mobile phone at that time did not have the Java bluetooth stack.

This version was my final attempt to do a desktop/mobile cross platform implementation, cut short when I got my first Android phone and decided that, unfortunately, modern touch phones without directional keys are entirely unsuited for this type of game. The name is short for “TinT is not Tetris”, which seemed awfully clever to me at the time, until I found out that someone else had already used the same name for his own version of Tetris. The present version is playable and even features a working TCP network mode, but aside from that it is entirely unpolished, unfinished, and probably quite buggy. 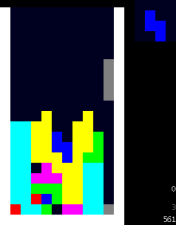 If you are wondering why I wrote yet another version of the same game at all: Because, in my opinion, most existing versions (that I have seen) on current platforms suck. Smooth controls are often a problem with open source/independent games, but with Tetris, nearly all versions I have tried suffer to an extent that makes the game uninteresting to me. I first played Tetris some time before the Gameboy version (which apparently many people today think was the original!), and aside from the fact that you could not partially drop the current tile, the controls were fine and, to my memory, ahead of the average modern version. But there is no denying that the Gameboy version is the best implementation of the game I have seen. The controls were spot on, and so was the overall game balance. The two player mode was perfect.

All my own implementations since the Amiga version have strived to match the behaviour of the Gameboy as closely as possible, and in my opinion, all three versions succeeded. Or at least, I could play my own versions without missing the Gameboy I sold years ago. Which I suppose is part of the reason why none of them got finished in at least a single player version.

Anyway, you can download this horribly unpolished, unfinished and unstable version, or play it right here as an Applet.