It’s been a while since the last update, but there finally is a new version of Grep Console, providing bug fixes and a new feature.

Also, because it has been such a frequent cause of confusion, the default match length for Grep View matching has been increased to 100.

As usual, thanks go to everyone who sent suggestions and bug reports to help continue improving Grep Console.

Jakub Staš suggested allowing Grep View to open random text files. Instead of implementing this as a Grep Console feature, I turned it into a separate plug-in.

Tail Console can open text files and output them to a new console. Like the GNU command line tool tail, the console will keep monitoring the file and output any new content added to the file live.

This is based on an idea I’d been thinking about for a long time. Clippets allows you to store the current clipboard text content inside Eclipse, temporarily or permanently, and later recall it directly to the clipboard, allowing you to use the clipboard for other content and then return to the earlier text. These so-called “clippets” can be arranged in collections for better overview. 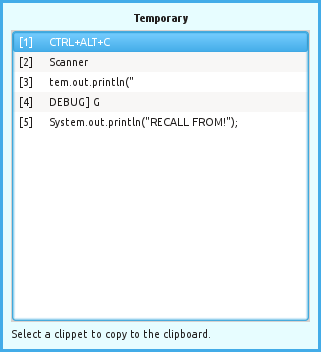 I have several ideas for extending Clippets with advanced features, but before I think about them in detail, I’d like to see what others think about the core functionality – and get used to working with it myself. So if you like the plug-in and have any feedback or feature suggestions, be sure to let me know!